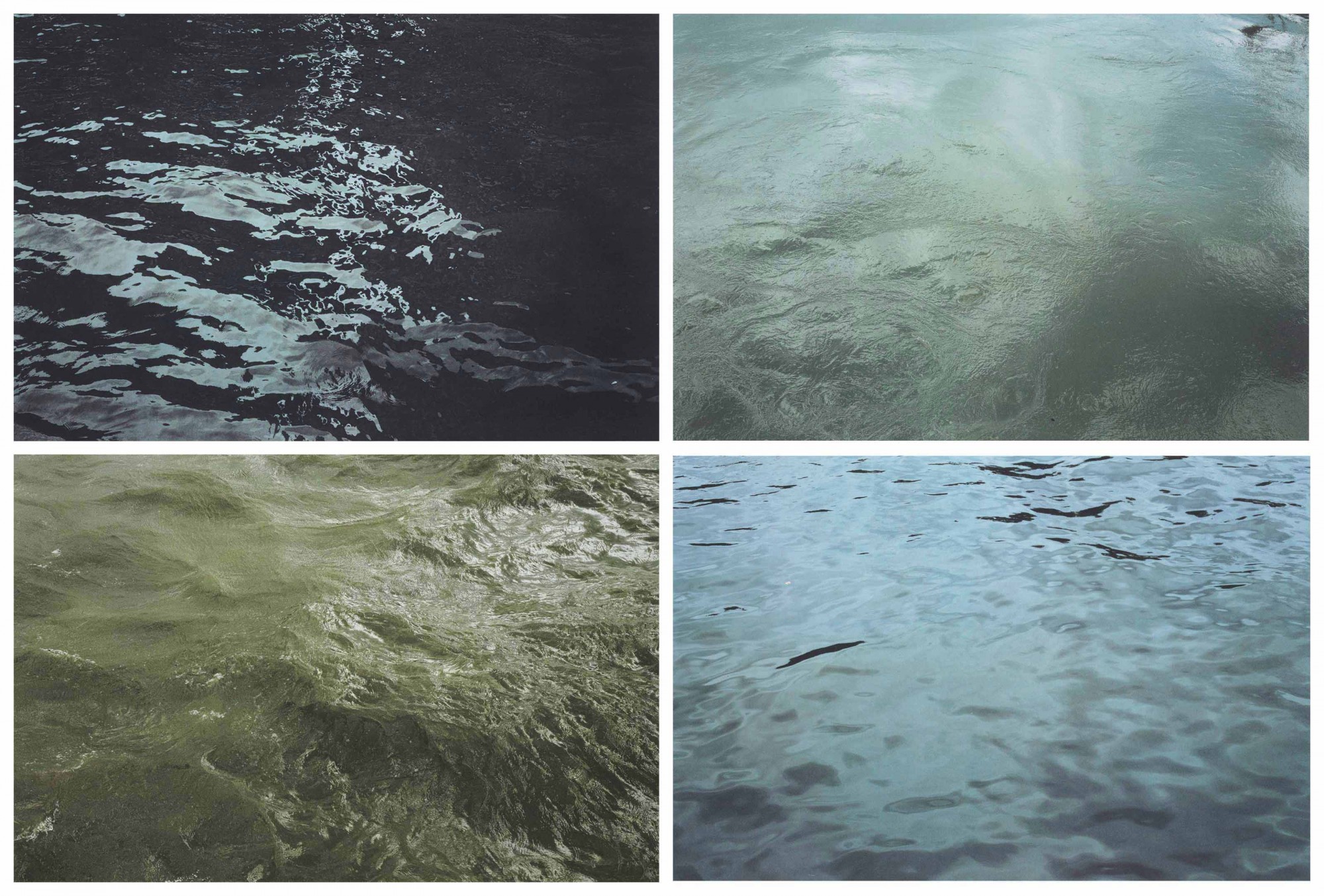 To introduce an issue of Objektiv focused upon institutional practices of exhibiting photography, I was invited to reflect on exhibitions I saw early in my career that have stuck with me.

I moved to New York in August 2001. My first season of art began in early September, one week before the terrible historical events visited upon that city. The memory of those sad and confusing mid-September days overshadows most of my encounters with art from that autumn and winter. Yet two quiet installations remain with me. The first, at the Dia Art Foundation, was of Roni Horn’s photographs and sculptures. After hiking too-steep stairs, one emerged, slightly breathless, into serene rooms bathed in winter light. My memory centers on an experience of transparency and reflectiveness. The show’s second room, at the time I visited, featured a line of pictures from Horn’s series Some Thames. She pointed her camera down toward the river’s murky surface, catching it in many shades of blue and gray and in many moods, from serene to cantankerous. It was sometimes all surface; at others it intimated great depths. No two rivers were the same, and yet every river was the same; to en- counter them was to face one’s own mutable identity. So, too, was it with two large sculptures given their own rooms. These heavy glass blocks, one black and one clear, featured milky, textured sides and transparent, seemingly liquified tops. The low rectangles, the size of coffee tables, were the same dimensions, but placed in rooms of different scales and with different orientations toward the windows. It was impossible to keep the memory of one clear in my mind while looking at the other. They canceled each other out but, in doing so, continuously renewed my sense of both.

Another installation marks that somber season. It, too, was placed in a museum room that let in plenty of winter light. Janet Cardiff’s Forty-part Motet was presented in a large, second-floor gallery at MOMA PS1 that features a long line of windows along two of its sides. Forty small speakers, each on its own stand, were arranged in a loosely drawn oval. There was space to walk around and between them, as well as two benches on which to sit. The gentle curve of the speakers’ placement is connected, in my mind, to the curves of the room’s barrel-vaulted brick ceiling. The artwork, like Horn’s two installations, is in part about how one’s experience fluctuates. Forty separately recorded voices are played back through the forty speakers. I remember pacing around the room, settling in for a few minutes with a man’s rich baritone or a woman’s resonant soprano. Then I would sit on a bench and let the sound braid itself together. On several of my visits, snow drifted outside the windows; with or without this atmospheric accompaniment, no two visits to Forty-part Motet were the same.

The writer Susan Orlean, describing recently her childhood love of libraries, characterizes experiences that resonate with me in this context: “It wasn’t that time stopped in the library. It was as if it were captured here, collected here, and in all libraries—and not only my time, my life, but all human time as well. In the library, time is dammed up…. The library is a gathering pool of narratives and of the people who come to find them.”

Since those early encounters in New York, I’ve visited thousands of exhibitions; written about hundreds; worked on scores; and curated about two dozen. When I pause to reflect upon what remains with me from that welter of experience, I return repeatedly to the intimate or the modest. Ambitious extravaganzas make their impressions, but don’t accompany me months or years later. What sticks are exhibitions as essays, in the traditional French sense of essayer—to try, to attempt. They give evidence of particular occurrences and of the feelings those arouse; they create atmospheres as much or more than they put forth bold arguments. The more humble of them might seem provisional or slight, but that tentativeness leaves space for me to surround them, over time, with my own experiences, to weave them into my life.

This type of art encounter can be hard to find. Institutional prerogatives, namely that of popular appeal and its attendant audience numbers, militate against it. The desire to ensure that exhibition images will be legible online—and therefore will circulate widely—also has warping effects: shows today are often arranged for the pictures of them, rather than for the in-person experience. And, especially with photographic prints or video projections, the decreasing cost of technology has encouraged a spectacle that is often unrelated to the subject of the artwork. None of these things must foreclose the type of intimacy and modesty I treasure. The examples of Horn and Cardiff given above, efforts that were not modest by any means, are evidence of that. But the conditions of exhibition-making today are not often conducive to intimacy.

Another version of this memorableness comes from substituting the particular for the general. Some of the most expansive exhibitions I’ve enjoyed remain with me thanks to an indelible detail. Late in 2002 I visited the Metropolitan Museum of Art and wandered in to a survey of Vija Celmins’s prints. Her quiet skies, dusty desert floors, and captivating spider webs were enchanting, but have combined, over the years, into a grayscale blur. One object retains its particularity: a wood block that had cracked in two. It rested in a freestanding case in the first room of the exhibition, which was to the left of the title wall. The accompanying label noted that this crack occurred after Celmins had put dozens of hours of work into its surface; distraught, she worked with the printer to devise a clamp that would squeeze together the broken pieces and allow her to continue her efforts at image-making. The heartache of that moment, when something she had worked on tirelessly came almost to disaster, serves as a mnemonic device for the broader difficulty of making art, and therefore of the time and energy Celmins has invested over the course of her career.

I can sense the concern rising within you that I want apolitical art experiences at a moment when right-thinking people should be working hard to counter nativist and nationalist forces. The kinds of experiences I’m recounting, and advocating for, need not be to the exclusion of argumentative or demonstrative projects. But it is during moments like this that the intimate and the modest is most readily jettisoned.

As all these examples suggest, my aesthetic predilection is for a soft melancholy; for artworks that reveal time passing; for the camera as a “silent” witness to quotidian experience. Yours is likely different.

Separately, my desire for the intimate and the modest follows Elaine Scarry’s thinking on the ethical value of beauty. As she wrote in On Beauty and Being Just, “what is beautiful prompts the mind to move chronologically back into the search for precedents and parallels, to move forward into new acts of creation … to bring things into relation.” This being-in-relation is what I value. Scarry continues: “It is not that we cease to stand at the center of the world, for we never stood there. It is that we cease to stand even at the center of our own world. We willingly cede the ground to the thing that stands before us.”

It was a crisp day in autumn 2007 and I was running around central London on the hunt for art. I duck into an unexceptional building and climb a narrow flight of stairs into Thomas Dane’s premises. There, in a small darkened room, a 16mm film projector rests on a narrow plinth. It is projecting a nearly motionless image of a horse lying on its side with a somewhat distended belly, its glassy, lifeless black eye pointed directly at the camera lens. It is an image of such transfixing stillness that only the point at which the film loops, returning to the scene the sunlight that has imperceptibly faded over the course of ten minutes, reminds me that time has not paused on the animal’s behalf. I watch again until the light returns, then again.

As all these examples suggest, my aesthetic predilection is for a soft melancholy; for artworks that reveal time passing; for the camera as a “silent” witness to quotidian experience. Yours is likely different. Nonetheless, my modest request is for more modest efforts. I yearn for simple exhibitions to counter overwrought ones; for undirected, intimate encounters with artworks; for trust that artworks will find their right audiences. The encounters I’ve described worked their way into my mind like a drop of dye filling a glass of water. Their impact was brief and localized, but as time progressed they spread, coloring my other experiences—and being subsumed within them in turn.