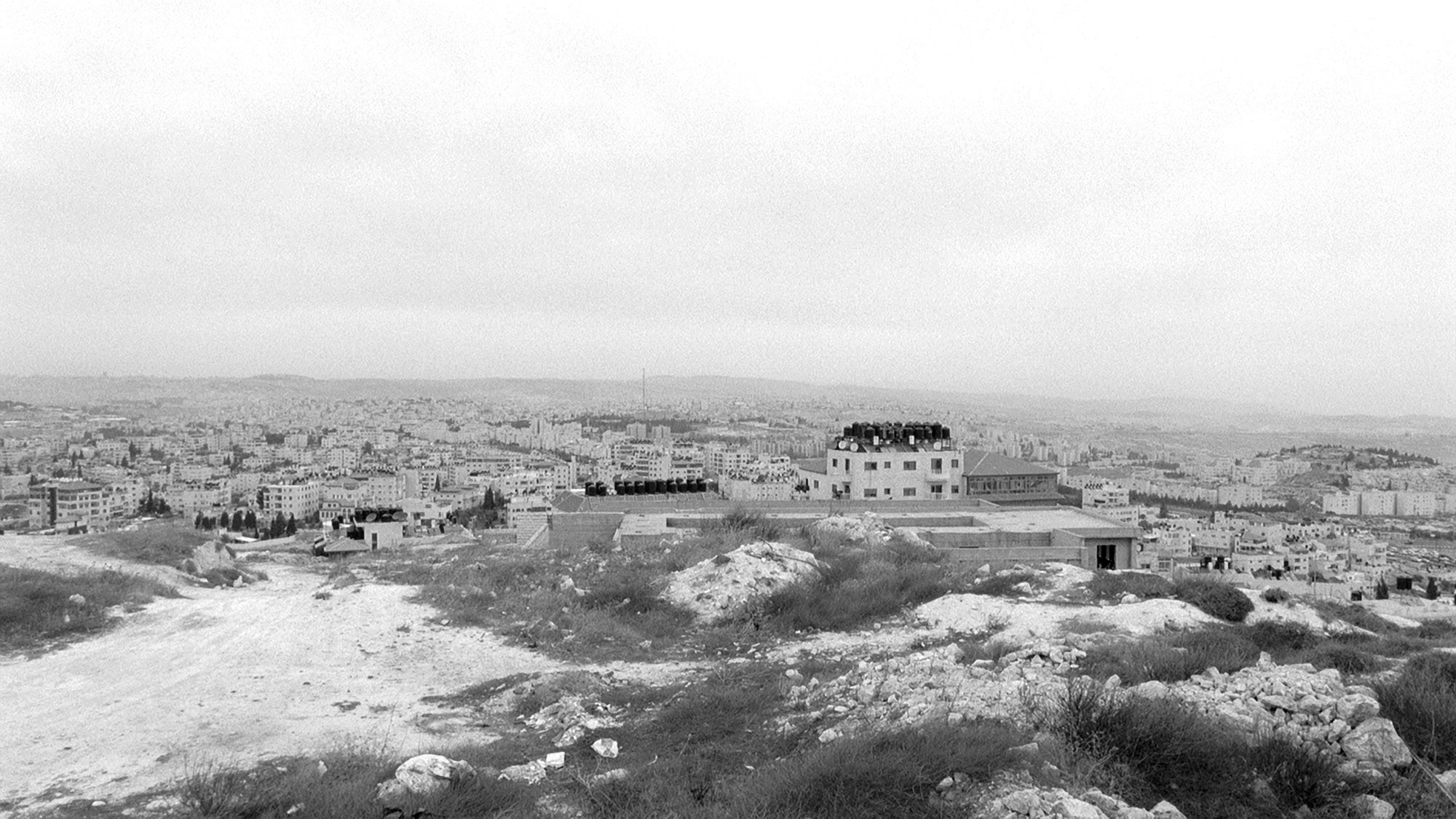 I admired Nir Evron’s film A Free Moment when I first saw it, in the 2013 ICP Triennial in New York. After writing about it in a review of that exhibition, I began corresponding with the artist, who invited me to write this essay for the catalogue accompanying an exhibition at the Tel Aviv Museum of Art. This essay was published as “Entanglements” in Nir Evron, Masad: Video, Film, and Photographs, 2009–2016.

When foreigners imagine the role landscape plays in Israeli politics, the separation barrier comes to mind first. Running along the 1949 Green Line and through the West Bank, it is large, visible, and talked about often. From afar, the evolution of the barrier can seem like a microcosm of broader developments in both state and society. Yet politics inhere, too, in less obvious places: a building, a street corner, a neighborhood. Each contains human meaning. Daily concerns often displace these deeper narratives; only effort reveals the slow accrual of overlapping pasts, and what those pasts might mean today.

Israeli artist Nir Evron knows that every site has its stories, and that the camera is a useful tool for gaining perspective on both place and time. Among other efforts, he has spent a decade telling the stories of particular sites through exquisitely calibrated videos, films, and photographs.

Three such works, which in retrospect make up a West Bank trilogy, take Israeli or Palestinian locations as explicit subjects. They scrutinize Evron’s homeland in forensic detail. At the same time, these short pieces represent an evolution in the artist’s method of expression. With each non-narrative video or film, Evron became more interested in revealing the materials and equipment that created it. The works engage not only their subjects, but also, with increasing clarity, their own construction. The reciprocal relationship between form and content has a surprising effect: each work is more austere than the last. The complicated histories Evron unravels for our consideration are re-woven in ever tighter arrangements.

Oriental Arch, a nineteen-minute video completed in 2009, roams Jerusalem’s Seven Arches Hotel during a typical day. Its static shots, ranging from a few seconds to nearly a minute in length, begin at dawn and end well into the night. The video moves slowly; the first significant activity occurs only after five minutes have passed. During this opening sequence, the artist treats his video camera like an architectural photographer or draftsman, offering fixed views that locate the building on its grounds and explain the horizontal sprawl of its wings. Shots are unpeopled or sparsely populated: a man peers into a computer screen at the front desk, another paints a wall, and a third replaces a light bulb in the ceiling. Eventually we see what appear to be hotel guests, and the camera occasionally ventures into backstage spaces like the laundry room and kitchen. It is never busy.

Israeli artist Nir Evron knows that every site has its stories, and that the camera is a useful tool for gaining perspective on both place and time.

It’s obvious that the hotel, which rests atop the Mount of Olives in East Jerusalem, was once glamorous and has, over time, lost some of its luster. Today, tourists complain on travel websites about its outdated furnishings but extol its extraordinary views. Despite this attribute, Evron rarely captures the vista beyond the hotel grounds; in one brief scene, the city garlands the hills outside its restaurant’s east-facing windows. Instead, the hotel’s antiquated modernity and its negligible number of guests are Evron’s subjects, and they result from specific historical circumstances—and mark the site with tension.

The Jordanian government built the hotel during the early 1960s on land owned by the Al-Alami family, prominent Arabs involved in politics. (It’s worth noting that this is an outsider’s understanding of its development; Israel claims the Jordanian government expropriated public land to build the hotel.) The building’s American architect, William B. Tabler, specialized in designing large-scale hotels in a recognizably cosmopolitan style. Originally named the Jerusalem Inter-Continental, the building’s sleek modern design symbolized an international outlook and the aspirations of a particular class of Jordanians. This ambition manifested itself in the building’s early history: in May 1964 the hotel played host to the founding conference of the Palestinian Liberation Organization (PLO), which resulted in the first Palestinian National Charter.

After the Six-Day War in 1967, when East Jerusalem—and the hotel’s site—came under Israeli rule, the property was placed under the control of the Custodian of Absentee Property. It now rests in a limbo of competing claims. As a December 2010 article in Haaretz relates, any plans to renovate or expand the Seven Arches requires the collaboration of Israel’s Foreign Ministry and the Jordanian government. A redesign, or a new wing of rooms, is a matter of international concern. (1)

Evron’s video, then, reflects not only upon the faded grandeur of the Seven Arches, with its midcentury aspiration toward cosmopolitan modernity. By capturing the hotel’s particular stasis and ennui, it also reminds viewers how such dreams are interrupted by human fallibility and discord. The disagreements that arise from such scenarios lead to behavior at once irrational and inescapable.

Two years later, in 2011, Evron revisited the architecture of 1960s East Jerusalem in his 35-mm film A Free Moment. Presented as a high-definition video that often covers the entire wall onto which it is projected, this work reverses the relationship between site and building established by Oriental Arch. Whereas the earlier video lingers on the hotel’s interior and exterior details, neglecting the city beyond its walls, A Free Moment was shot in a building that was never completed; with no walls to block the view, the camera can’t help but capture the city extending beyond it.

The film is composed of a single four-minute shot. A computer-controlled robotic apparatus determines the camera’s movements, which consist of a dolly shot, a 360-degree horizontal pan, and a 360-degree upward tilt. These movements occur simultaneously and last exactly as long as it takes to expose one film cartridge. The film’s taut structure helps compensate for the incomplete form of the building and the mutability of its environment.

As with the Seven Arches Hotel, the subject of A Free Moment occupies a lofty perch above the eastern part of Jerusalem in territory once governed by Jordan. The concrete hulk is what remains of the royal family’s Summer Palace, begun in 1966 and left incomplete when the area became a site of battles during the Six-Day War. As with the Mount of Olives, this hill, known as Tell el-Ful, is now territory administered by Israel.

The viewer’s experience, as the camera moves along three axes at once, is as disorienting as the political changes that halted the building’s construction. Viewers of the wall-size projection feel the camera’s silky movement in their stomachs as ground and sky become confused. Its lens focuses upon scarred concrete ceilings that, briefly shorn of context, look like the surface of the moon. Eventually the dolly track and the robotic arm operating the camera come into view. At the end of its four-minute ride, the camera is once again upright and once again pointed toward the northern end of the building, this time from the opposite end of the structure. The city, seen without obstruction at the beginning, is now sandwiched by two heavy concrete floor plates. The dolly track is like a zipper that, when pulled, will reveal even more of the surroundings.

In Oriental Arch and A Free Moment, politically relevant historical information is encoded in a language of formal austerity. Evron’s use of structuralist or materialist strategies is appropriate. Such inquiries into film’s characteristics were first articulated, and were explored most avidly, during the 1960s. The self-reflexive explorations were a search for film’s essential identity. Question of identity, of course, permeate Israel’s history, become acute during the 1960s, and continually reshape the human meaning of such places as the Seven Arches Hotel and the Summer Palace.

The most recent of these films, Endurance, completed in 2014, furthered Evron’s exploration of structuralist filmmaking. His subject, however, is not the past but what was—at the time he made the film—the near future. Construction had begun in January 2010 on Rawabi, hailed as the first planned city built for and by Palestinians. Located nine kilometers north of Jerusalem, the nearly billion-dollar project encompasses six thousand housing units and a projected population of twenty-five thousand to forty thousand residents.

Evron uses Rawabi’s model apartment, a human-scale microcosm of this ambitious plan, to organize his film. In doing so he deployed no camera, but rather digitally rendered the apartment’s features—doors, windows, and furniture—as black and grayscale rectangles. Each of the film’s shots is like an abstracted architectural elevation, and their duration represents the length of the wall being depicted. The viewer experiences the work as a slow, staccato dance of geometric shapes.

For Evron, using an outmoded technology is not meant as an appeal to the viewer’s nostalgia. Rather, celluloid film does something that the ones and zeros of digital-projection technologies cannot: it translates time into space (and vice-versa). Because of the artist’s careful planning, you could unspool the 16-mm film used in Endurance and draw out the apartment’s floorplan at one-to-one scale.

Evron charts entanglements—of histories, of political power—in places it might be easy for Israelis to assume are untroubled by complexity.

What is a model apartment if not a projection of an imagined future? Evron’s two earlier films, however, demonstrated the perils of assuming the smooth unfolding of ambitious plans. Indeed, like the Jordanian effort to build the Summer Palace, Rawabi’s construction encountered unexpected setbacks. In 2014, after hundreds of families had paid for their apartments, the city remained uninhabited because Israel had yet to connect it to a nearby water main or to permit an access road. The developer alleged the delays were politically motivated; residents only began moving in during August 2015.

In all three works, Evron has pinpointed locations buffeted by competing interests and has revealed their tensions. His shifting relationship to the camera—manning it for Oriental Arch, programming a robot to record A Free Moment, dispensing with it altogether in Endurance—has created an increasingly abstract visual language. This evolution is perhaps borne of increasing confidence in his ability to capture and reframe the stories he wishes to tell. Evron charts entanglements—of histories, of political power—in places it might be easy for Israelis to assume are untroubled by complexity.

Having done so, recently Evron has ranged again beyond Israel’s borders in search of subjects. His 2015 film Geist und Blut (“Spirit and Blood”) and related photographs treat the Pirna-Sonnenstein sanatorium, outside Dresden, in a manner akin to his investigation of the Seven Arches Hotel. (This time, however, the projection is rotated ninety degrees, encouraging viewers to tilt their heads to accommodate the images.) A recent sojourn in the United States led to a series of photographs depicting wooden totems in the “Indian Village” at the Jamestown Settlement in Virginia. And in La Solitude (2016), Evron unearths an alternate history of the Dreyfus Affair. The artist pairs voiceover narration about the role of cameras in the scandal with images from French Guyana and Devil’s Island, the desolate rock where Alfred Dreyfus was sentenced to life imprisonment.

What distinguishes these works from the West Bank trilogy is that his subjects are already part of a historical framework. The sanatorium is used today as a memorial to the disabled and mentally ill victims of Nazi euthanasia. Jamestown is part of a large cultural heritage site commemorating early contact between English settlers and native peoples. The Dreyfus Affair has been debated by generations of scholars. This makes intuitive sense: deprived of lived experience as a basis for understanding these places, Evron builds upon historical scaffolding that already exists. Where these forays lead next is an exciting prospect. Evron’s talent for beguiling viewers with one final entanglement—of artistic form and narrative content—means that wherever he looks next for material, he’s certain to make of it something memorable.