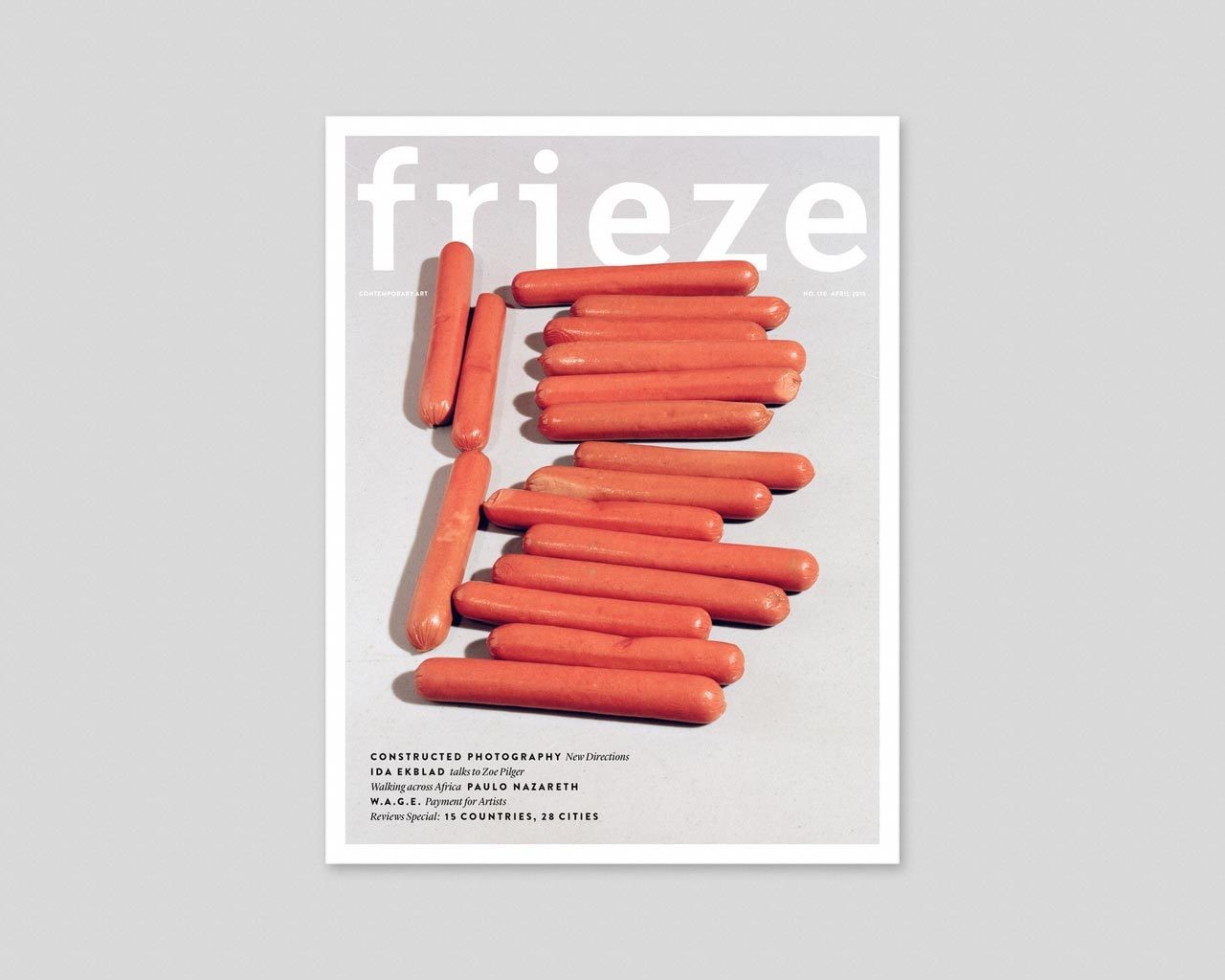 Lucas Blalock belongs to a generation of artists, mostly in their thirties and from North America, which is exploring the component parts of photography in a time of dramatic technological change. The results of their investigations vary in form and genre: some work in an abstract vein; others tease apart representation through analogue and digital collage techniques; others exhibit objects that, to a conservative viewer, might only tenuously be described as “photographic.” Depending on how widely you wish to cast your net, artists as diverse as Walead Beshty, Talia Chetrit, Sara Cwynar, Jessica Eaton, Shannon Ebner, Sam Falls, Daniel Gordon, John Houck, Artie Vierkant and Hannah Whitaker can be brought together under this rubric of photographic experimentation. And they often are, by museums and galleries newly interested in an artistic medium no longer ghettoized by historical biases against it.

Blalock’s signal contribution to this dialogue-through-art is his explicit foregrounding of the role computers and digital processing play in the creation of photographs today. The word explicit is key. The labour that underpins many other photographs, especially those created for commercial or editorial use, is effaced in the final product; the goal is for viewers not to notice the airbrushing, the colour correction or the masking. In the photographs that first brought him widespread attention, such as those in his 2011 solo exhibition at New York’s Ramiken Crucible, Blalock reversed that priority, crafting ungainly digital alterations and exposing them to public scrutiny. It’s a simple premise that yielded profound results. In the last five years, Blalock has exhibited and published a large body of strange, and strangely compelling, photographs—still lifes, mostly, but also portraits and semi-abstract compositions—that encourage viewers simultaneously to decode what is being depicted and to ruminate on how that depiction is constructed.

This counters the transparent accessibility of most photographs today, which is augmented by their presence on screens and the ease with which we can modify them. In early interviews, Blalock referenced Bertolt Brecht and spoke of the “theatrical” nature of his studio work, of how he liked to disclose his working process in order to complicate seamless viewing. In recently published conversations, however, Blalock has begun elucidating a broadened set of intellectual concerns that might best be understood through the term “friction.”

For a photographer well-versed in digital techniques and the meanings they convey, Blalock speaks often about bodily sensation. He is increasingly trying, he says, “to think through the activity of relating the body, in all of its obtuseness and haptic intelligence, to virtual spaces.” Photographs are commonly understood as spaces of imaginative projection: an artist imagines what a photograph will convey, while the viewer, frequently enough, imagines something else entirely. We think of photographs less often as arenas of bodily projection, of what it would be like to move physically through the spaces they depict. And the seemingly arbitrary rationale behind many artists’ choices of photographic print sizes—in which bigger is frequently regarded as better—further hampers our bodily relationship to photographic objects. In this regard, Blalock’s frequent use of the tabletop still life, often depicting mass-produced objects at nearly actual scale, can be seen as an attempt to create photographs you feel you can reach into. Blalock’s preferred print size, though creeping upward in recent years, remains at the edge of the intimate: many of his pictures could be lifted off the wall and carried by one person. In an era when printing from a negative to see what image was captured is no longer necessary, photographic “objecthood has come to feel like an intentional act instead of a necessary step in looking at what you have made.” Many of the decisions Blalock takes about his photographs enhance a viewer’s haptic relationship to them.

For a photographer well-versed in digital techniques and the meanings they convey, Blalock speaks often about bodily sensation. He is increasingly trying, he says, “to think through the activity of relating the body, in all of its obtuseness and haptic intelligence, to virtual spaces.”

But the artist deliberately limits the number of digital interventions he makes: “I try not to introduce too many elements because, as they add up, the picture shifts more and more into being only a surface, and I am interested in the way that the digital might be a continuation of the spatial problematic within the photograph […] in working ‘within’ instead of ‘on top of’ the photograph.” Consider the simple vertical black strokes Blalock has imparted to the canvas bag depicted in shoe (2013): they seem finger-width, and it’s easy to imagine the scratchy texture of the fabric underneath your fingernail while tracing their irregular lines. Or observe the digital seams he has inserted into the plastic of kiddie pool (2013), potentially sharp edges that interrupt the machine-made patterning of its underside. Or, most pointedly, a recent photograph in which a series of strawberries, laid out on bubble wrap, are partially obscured by images of the strawberry candy famously wrapped in foil printed to look like the original fruit. (The picture generates so many sensations: I want to touch the bubble wrap; to hear it pop and the wrapper crinkle; and to taste both the organic and synthetic fruit flavours.)

Too often we neglect to think about the Photoshop tools used to create these effects: a lasso, an eyedropper, a stamp, a rubber eraser, a pointed-finger smudge tool. Each has a real-world referent that implies a physical interaction, and it is this implication, so easily ignored, that Blalock wishes to disclose: “The general use of technology to ‘adjust’ what you’ve captured,” he writes, “sets up a new territory to touch.”

Bodies don’t only interact with objects, and photography can convey “friction” in more ways than the digital means outlined above. If Blalock wishes to preserve, or reintroduce, “friction” into the world of digital-image editing, his impulse for doing so is similar to that driving his choice of objects—often the kind of mass-produced items found in a 99-cent store. How can photography “develop relationships to the objects that frustrate their reading as commodities and, in turn, pull them into another sense of economy”? Here he’s pursuing bigger and more challenging quarry. Does he wish for photography to disrupt the capitalist drive toward a frictionless environment in which objects, bodies and money circulate without impediment? Professional photographic images, the vast majority of which are meant to smooth those flows, are central to that process. It’s hard for artworks, which are themselves commodities no matter how cleverly conceived, to frustrate the commodity status of the objects they depict.

In the world of digital media, one way to arrest attention is to create something perverse, or strange, or funny, or that iterates subtly and fascinatingly. Blalock is good at the perversely strange and funny.

Instead, a simpler statement of purpose might pertain to attention. In the world of digital media, attention is an “economy” that translates directly to money, and one way to arrest attention is to create something perverse, or strange, or funny, or that iterates subtly and fascinatingly. Blalock is good at the perversely strange and funny, as attested to by one of his recent subjects: hot dogs. The artist’s latest series of photographs, exhibited last autumn at White Flag Projects in St. Louis, Missouri, seems like the first full step away from the manipulated still lifes for which he is best known. The show—rather wittily titled “Late Work”—presented nine works, each of a group of hot dogs resting on a seamless white backdrop. (There were no buns.) Through careful variation of lighting, angle, focus and, of course, frankfurter placement, Blalock created photographs that were as mesmerizing as his earlier work—and without the obvious digital manipulations.

I could discuss how some arrangements call to mind post-minimalist sculpture: Box and Circle (both 2014) look like Walter de Maria stopped by the convenience store on his way to the studio. But who wants to expend intellectual energy on pictures of hot dogs? Instead, notice how Blalock has carefully reworked the terms of his earlier photographs. The hot dogs—subtly sweating, with irregular skins and wrinkled ends—interact both delicately and forcefully. They are bodies that do the touching for us (though their weird, naked surfaces still induce a desire to reach out a hand). And the restrained way Blalock photographs them—no distractions from the pile-ups—parallels the restraint he employed while editing his earlier still lifes. There are many ways in which these pictures are wrong. This is high-end product photography for products rarely seen so unadorned. The friction between our expectations and the reality of Blalock’s depiction, to say nothing of the subject’s textures, generates a certain kind of heat. Just what is going on with the three hot dogs on the right-hand side of Six (2014), anyway? And why does a photograph with that title only depict five weiners?

Blalock has described the “uncanny and libidinal” as the domains he wants his images to enter into and this series accomplishes that in new and intriguing ways. By choosing objects as proxies for human bodies, and photographing them in unnatural situations that connote very specific human interactions, Blalock has invested them with a surreal corporeality. Were these photographs made by less capable hands, the idea of writing about them, even at such scant length, would seem foolish. It’s in part a testament to the innovation of his earlier work, and the savvy rhetorical framework he built up around it, that Blalock can now do something so simple and yet make it so strangely alluring. These hot-dog photographs command attention with a visual economy that obviates, yet strangely invites, explanation.