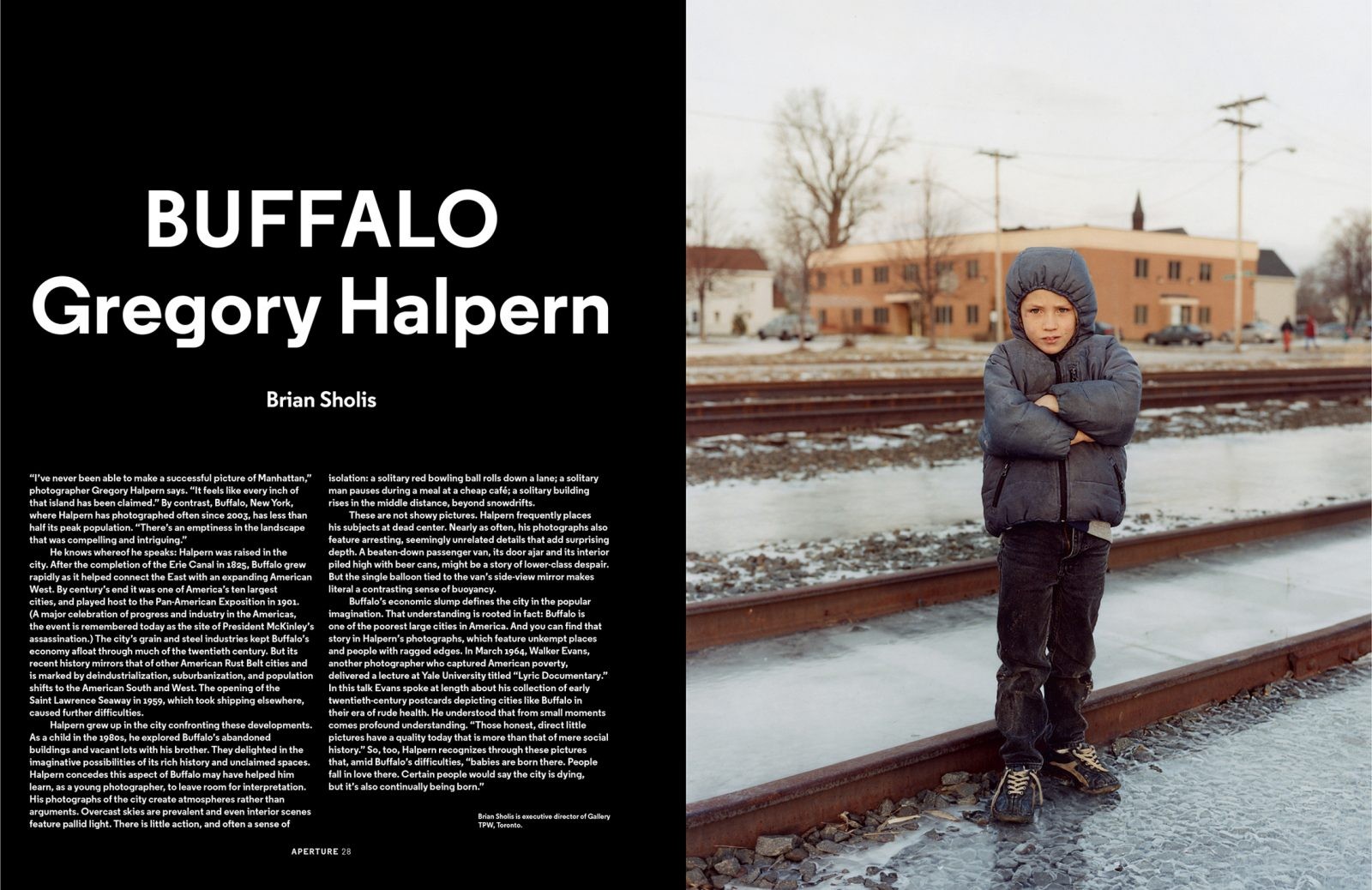 “I’ve never been able to make a successful picture of Manhattan,” photographer Gregory Halpern says. “It feels like every inch of that island has been claimed.” By contrast, Buffalo, New York, where Halpern has photographed often since 2003, has less than half its peak population. “There’s an emptiness in the landscape that was compelling and intriguing.”

He knows whereof he speaks: Halpern was raised in the city. After the completion of the Erie Canal in 1825, Buffalo grew rapidly as it helped connect the East with an expanding American West. By century’s end it was one of America’s ten largest cities, and played host to the Pan-American Exposition in 1901. (A major celebration of progress and industry in the Americas, the event is remembered today as the site of President McKinley’s assassination.) The city’s grain and steel industries kept Buffalo’s economy afloat through much of the twentieth century. But its recent history mirrors that of other American Rust Belt cities and is marked by deindustrialization, suburbanization, and population shifts to the American South and West. The opening of the Saint Lawrence Seaway in 1959, which took shipping elsewhere, caused further difficulties.

Halpern grew up in the city confronting these developments. As a child in the 1980s, he explored Buffalo’s abandoned buildings and vacant lots with his brother. They delighted in the imaginative possibilities of its rich history and unclaimed spaces. Halpern concedes this aspect of Buffalo may have helped him learn, as a young photographer, to leave room for interpretation. His photographs of the city create atmospheres rather than arguments. Overcast skies are prevalent and even interior scenes feature pallid light. There is little action, and often a sense of isolation: a solitary and red bowling ball rolls down a lane; a solitary man pauses during a meal at a cheap café; a solitary building rises in the middle distance, beyond snowdrifts.

These are not showy pictures. Halpern frequently places his subjects at dead center. Nearly as often, his photographs also feature arresting, seemingly unrelated details that add surprising depth. A beaten-down passenger van, its door ajar and its interior piled high with beer cans, might be a story of lower-class despair. But the single balloon tied to the van’s side-view mirror makes literal a contrasting sense of buoyancy.

Buffalo’s economic slump defines the city in the popular imagination. That understanding is rooted in fact: Buffalo is one of the poorest large cities in America. And you can find that story in Halpern’s photographs, which feature unkempt places and people with ragged edges. In March 1964, Walker Evans, another photographer who captured American poverty, delivered a lecture at Yale University titled “Lyric Documentary.” In this talk Evans spoke at length about his collection of early twentieth-century postcards depicting cities like Buffalo in their era of rude health. He understood that from small moments comes profound understanding. “Those honest, direct little pictures have a quality today that is more than that of mere social history.” So, too, Halpern recognizes through these pictures that, amid Buffalo’s difficulties, “babies are born there. People fall in love there. Certain people would say the city is dying, but it’s also continually being born.”